My Office: One Room Challenge Week #5

My Office: One Room Challenge Week #5

Published on April 30, 2015 by Rachel Bauer in Blog, Projects, Uncategorized 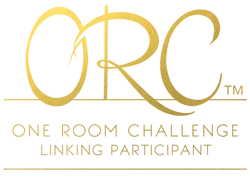 It’s week #5 of the One Room Challenge, the crazy twice yearly event where designers and design bloggers everywhere completely redecorate one room in six short weeks.  If you’d like to see the progress on my office so far, see Week 1, Week 2, Week 3, and Week 4.  You can also see the other linking participants here and the Wednesday participants here.

This week I focused on getting the bathroom nook of the room fixed up a bit.  It looked like this before: 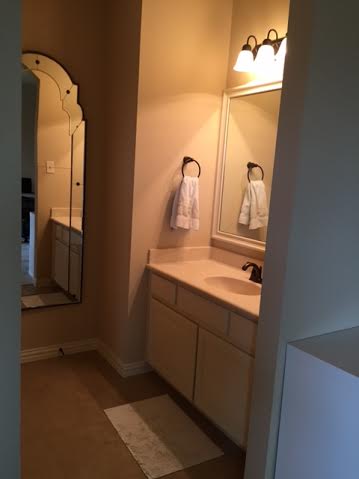 I added cabinet hardware to the vanity, and I also changed the vanity light.  We have six vanity lights in our house–all exactly like the one in the before picture above.  Yuck!  This is the first one to get changed out, but the others’ days are numbered too.  I replaced it with an antique sconce that I got at Scott’s Antique Market in Atlanta and then I hung my John Derian  decoupaged plates on either side.  These plates hung in my daughter’s bathroom in our last house: 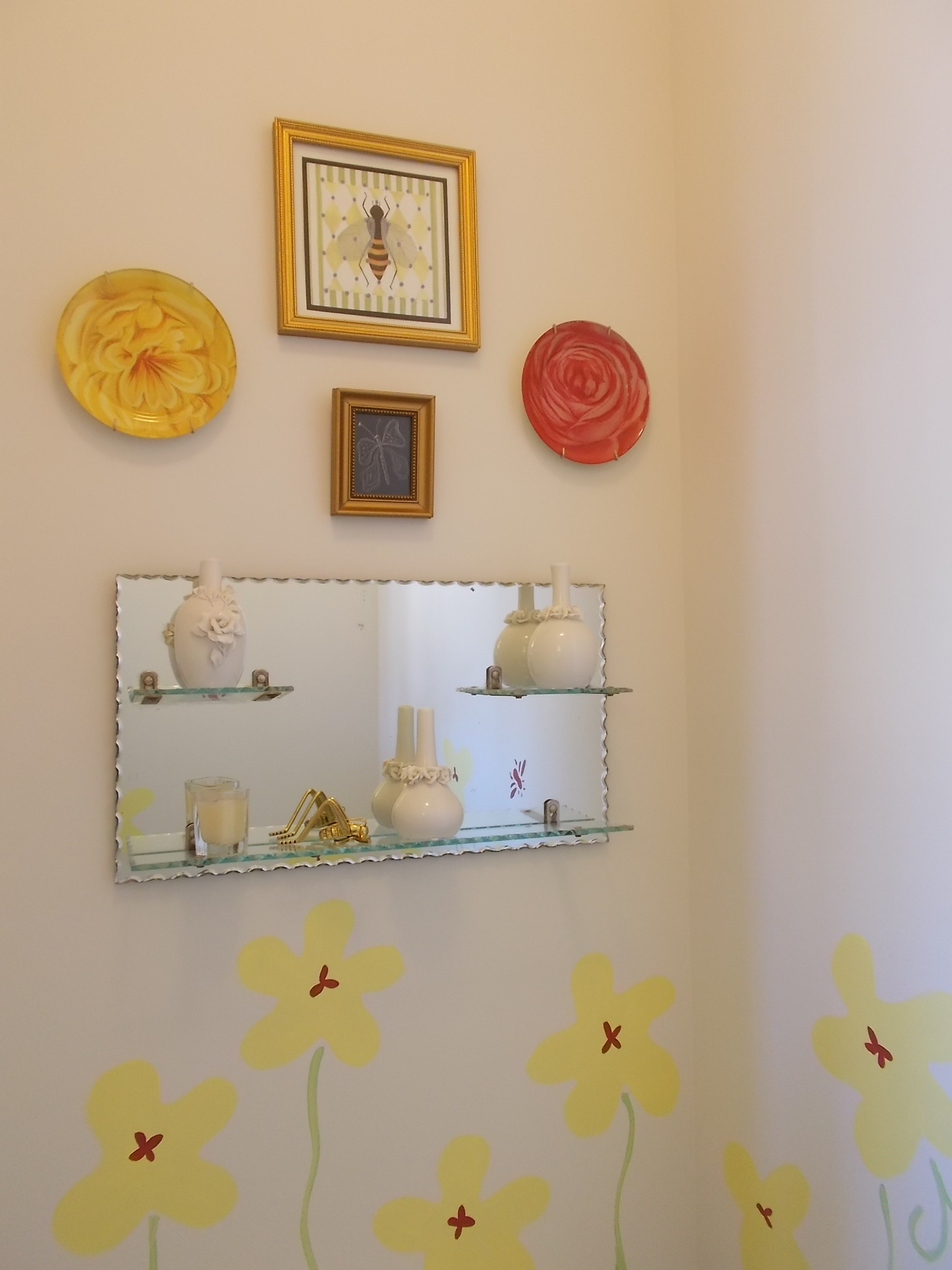 Decoupage plates in our last house.

I mentioned last week that I was considering either a mural or a trellis on the walls in here.  I decided to do a mural based on Barbara Barry’s W3004 wallpaper for Kravet, that unfortunately has been discontinued. 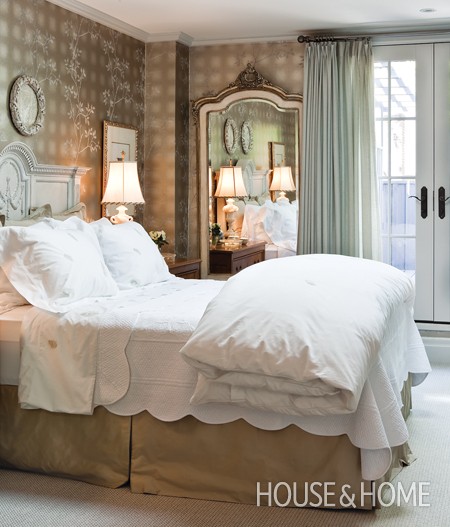 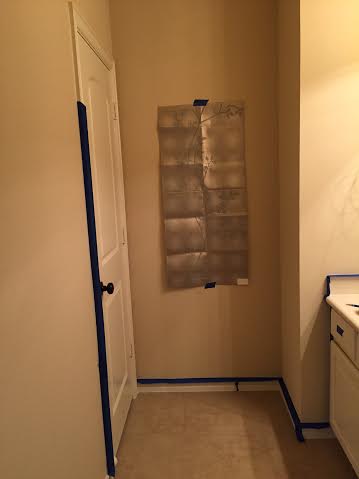 Sample of wallpaper in bathroom area.

The background looks like tea paper and neutral branches with leaves are in the foreground.  I wanted to keep the background color similar to the existing wall color to still have it relate to the Office space.  This area is a little dark, so I thought the metallic finish in a similar color would look nice and would bounce some light around the space.  I’ve used the metallic paint from Valspar at Lowes before so I tried them first, but unfortunately they’ve gotten rid of most of their metallic colors and the only ones left were very bright and gold.  Then I tried Sherwin-Williams, and they had the perfect color.  It’s Kilim Beige glaze from their Metallic Impressions collection.  It’s just a very subtle difference from the original wall color.  After adding the glaze to the walls, I drew the outlines that would define the pieces the faux tea paper with a silver Sharpie. 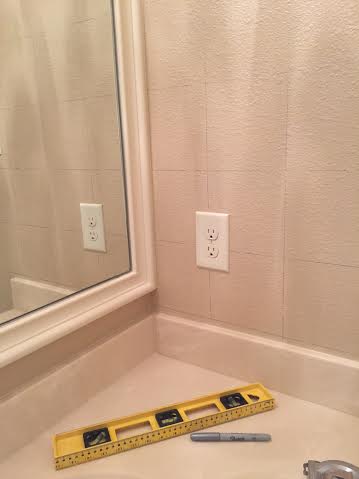 And then I…went to sleep.  I haven’t finished the mural.  I want to sleep on it and decide what to do next.  I don’t want it to be too busy.  Tune in next week to see the result!

The other thing I worked on this week is my Office pegboard.  I had seen lots of cute pegboards on Pinterest and wanted to add one for storage of sewing notions and craft tools.  Some pegboards that inspired me: 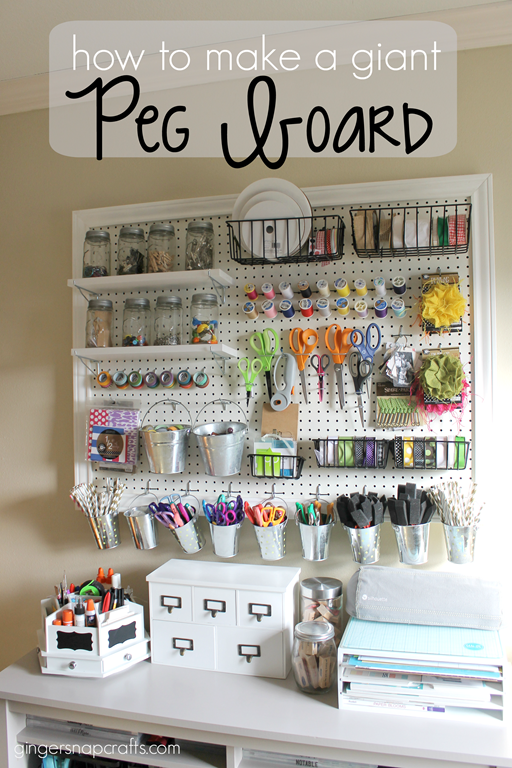 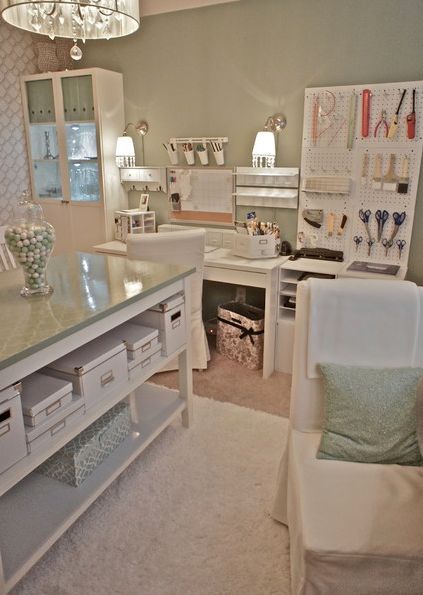 After buying the pegboard, painting it, and hanging it, I discovered two things.  First thing, pegboard makes me want to throw up!  Really, looking at all those little dark holes makes my dizzy and nauseous.  I’m hoping that after I hang things on it, it won’t bother me so much (otherwise, it’s coming down!)  The second thing that I discovered: 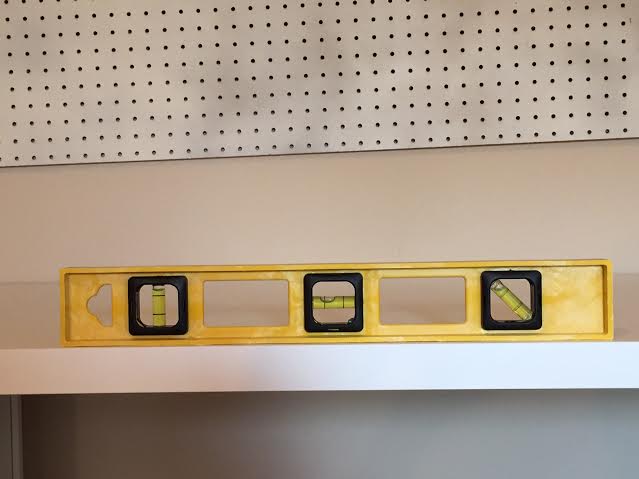 My desk is not level at all.  I used the Ikea Nipen legs on one side and the Ikea Klimpen bookshelf on the other.  These are sold to be used together, but apparently they’re not the same height.  I will fix that by next week.  Plus the gazillion other things I have left to do.  I can say that I’m sitting in my half-finished office writing this blog, and I love it.  The dogs love it.  It’s going to be a very functional and pretty space to spend lots of time–if I can just get through the next week!